This is a project to learn about people-power, specifically, how to best create and use a human-drawn plow. We’ll find out roughly how much individuals can pull for a long time. We’ll find out how many humans it takes to do what two oxen did. And then, we’ll test it on an actual plow.

Very importantly, this will not just be words. In the tradition of Professor Barker, who actually had folks performing archery and other activities, we will do real experiments. Enough with the endless blah blah blah.

I’m literally going to ask people to pull. Moreover, I’ll approach it as a sport, so, as with any sport, Consideration #1 will be SAFETY.

It all began with some cursory research. I wanted to illustrate the process of plowing, as done on Tékumel, a world sans horses or oxen. Curiously, humanity of real-world Earth appears to have gone so rapidly from the hoe to the animal-drawn plow that there are no depictions of humans in harnesses*. The thought occurred to me: this is probably a technology that’s undeveloped.

Perhaps a human-pulled plow, constructed with respect for modern physics and ergonomics, is not as onerous as most folks tend to assume. Such a device might even be of use to those who, for one reason or another, want an alternative to draft animals and gas/diesel powered motors.

*As a footnote, an iron plow from the Han Dynasty in China is said to have been drawn by humans. This assertion is based on the apparent absence of draft animals in that region at that time. I have not yet found access to photos of this plow.

I’m more familiar than you probably knew with “Pony Play”, a kinky hobby for folks who dream of being treated (somewhat) like horses. Some like to carry around their “Master” or “Mistress” playmates. A few of them even pull carts. It’s important, for safety, for “human ponies” who do anything of this kind to be in pretty good physical shape.

HEALTH. Before anybody helps me by being a human draft critter, I will need a doctor’s okay on this, and a release form. After that, there’ll be a couple weekly practices, building up skill and strength. This is actually a form of weight and endurance training. If it sounds like I’m taking this part very seriously, well, I am. Safety first. I can’t stress that enough.

Unlike weight training, I’m not maxing-out our plow people. This is more, a simulation of what could be done longterm, for hours, not going for a Guinness World Record. (It would be really great if I could get assistance from someone with a strong background in something like health medicine to advise me!)

CLOTHING. Trustworthy safe footgear will be important. The most likely place to be doing this is a parking lot. Bare feet won’t work. Because the waist belt has straps that go below the legs, some kind of sweat pants or jeans will be needed (if only because it is more sanitary).

NEWTONS! The pullers are going to get hooked up to a weight. At the very simplest, I’ll take a couple of cardboard fridge boxes and glue them together into a big brown rectangle. The front end will be attached to a rope.

Starting out with one plow-person at a time, I’ll put a cylinder weighing device between this “sled” and their harness, to measure their motive force. I’ll personally be the first to try this, loading just a couple of cinder blocks onto our land-sled to drag. Of course, if I’m doing this, I can’t read the scale. I’m looking for assistants, to be both the amateur scientists and the subjects.

It usually takes two oxen to break up land to make it farmable. According to papers on the subject, that’s 1500 Newtons of force, applied longterm. How many humans does it take to even DO that, for (let’s say) fifteen minutes at a time?

As far as I’ve been able to figure out– nobody actually knows. There’s just a lot of theorizing. I have a strong suspicion that pulling a plow with human power, especially using a modern knowledge of physics, is actually not as onerous as it sounds.

HEALTH. Safety first, and safety last, too. A big challenge will be preventing everything from blisters to permanently injured knees. To work, this should be no more strenuous or hazardous than pedaling a bike up a hill.

THINKERS. In moderation, I’ll benefit from suggestions from observers. There are some real problems to be solved, and I don’t imagine I know it all.

Just discussing it casually, somebody said, “Hmm, maybe you could hire one of those downtown pedicab guys to pull.” Hmm!

INNOVATION. From what I can tell from my preliminary research on plows, humanity seems to have jumped really fast from hoe-ing, to hooking a plow to an ox. That worked so well that there wasn’t much development of human harnessing tech. If we went through such a phase, that information has been completely lost to time and corrosion.

That’s why I don’t even know what a people-plow harness should look like. The vast majority of harnesses worn in Pony Play are more for show than actual work.

Interestingly, the horse “collar” was one of the most revolutionary devices in history. Prior to its invention, a horse couldn’t plow for very long or far. *After* the invention of the horse collar, the horse replaced the ox in most places.

HARNESSES. For safety, this needs some serious ORIGINAL design. The harnesses will be specifically created for this project. I foresee that developing a harness for humans to SAFELY and efficiently pull loads is going to be key to this project.

This harness is for resistance training using weights. Because it stresses the spine in a dangerous fashion, this design was rejected.

Pulling from the waist is safer, as with this skiing belt harness.

This is a bit of speculation, here.

HOMESTEADS. Most folks would like for humanity to “reduce the carbon footprint”. Even organic farmers have to burn gas or diesel to plow. Wouldn’t it be great if there was an alternative that didn’t use a rototiller or tractor? Maybe even one that’s a weird but uber-healthy kind of fun?

PARKLANDS. When people walk on trails, they pack the soil down. This actually damages the environment. The hardened dirt interrupts water absorption, and this causes bad secondary erosion nearby. One option to prevent this is to mulch the trail with wood chips (usually made from recycled Christmas trees).

The parks departments also closes off sections of a park to let that land recover. They run a gas-powered tiller through the worst compacted trails to bust them up.

There are places where this isn’t possible because the land is very irregular. I assisted in land restoration in Bull Creek Park (Austin) where it was done with pick-axes.

Realizing I’m probably going to be my own first guinea pig with the plow project, I’ve started the regimen that will get me in shape to pull weights. These exercises all assume the person involved leads a sedentary life, doesn’t even go for regular walks, and is therefore probably in terrible shape.

Before embarking on any health plan, please consult your M.D. first. Exercise responsibly.

The Safe Leg Lift packs on secret muscle, below the tummy and around the tops of the legs, that improves balance. It makes walking more efficient.

It’s a relatively mild exercise that doesn’t compress the stomach like a sit-up. It targets the lap region, including “inguinal” and “femoral” areas. It’s good to keep these areas toned for hernia-prevention. It is a preliminary to more advanced exercises such as crunches, V-sits, and hanging leg lifts. 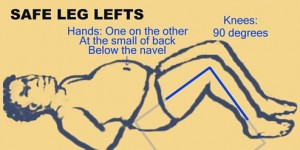 1. The person lays in a “supine” position. The hands are placed below the back where the spine curves. They should be directly below the belly button.
2. Knees should be at a 90 degree angle like in the picture. The backside must be kept on the ground.
3. The heels are lifted high enough to pass a bowling ball below them.

Some exercise regimens prescribe extending the legs. I feel this risks disrupting the value of its isolation. “Safe Leg Lifts” improve the iliopsoas.

Instead of extending one’s legs to make it more challenging, get a milk jug, one with a screw-on top. Lift the jug with both your feet.

When you feel comfortable, open the bottle, add 1 cup water, close it. Do your safe leg lifts with the sloshy weight. Keep this thing around; it’s going to be very useful. I think I’ll call my bottle Wilson.

This one firms up forgotten muscles above and below the knees. It is very specific, and it looks totally silly. Good. Life is dull. Take a walk on the wide side! *** Be sure to practice the basic Safe Leg Lifts EVERY MORNING for a few days BEFORE you do this one. I’m not a believer in the axiom that exercise is only good if it hurts. It takes us a year to learn to walk with our baby bodies– now a lot of us are getting reacquainted with our adult bodies for the first time. Let’s not ruin it. Take it slow. Do the Safe Leg Lifts first. ***

1. Stand with feet their normal distance apart. Look down. Check that your feet are pointing forwards. Toe-ing out or toe-ing in “cheats” the isolation.

2. Put your feet just outside where they were. Bend your knees a little. This is a classic “shoulder wide” stance.

3. Now place your feet outside of the shoulder stance. This is known as “Mǎbù”, “San Chin”, “Zhan Zhuang”, “Kuda-kuda, “Kekuda”, “Juchum Seoki”, “Kiba Dachi”, “Horse Stance”, and a hundred other names (including “My Balls So BIG”). It has so many names because it is very universal in martial arts.

4. Do a quick posture check. Shoulders should be back. If you’re fat like me, you will be balanced when you feel like your chest is thrown way forwards. Draw the head up as if an invisible string was pulling you up by the crown.

5. For beginners, hold the hands as fists at the corners of the hips. Take a deep breath. Roll the shoulders up and back– and keep them there. Breathe out.

7. You don’t have to go far. Cover a distance three times your height.

You did it? Good! You’re done. Do it again tomorrow.

While “Safe Leg Lifts” helps us avoid hernias, “Horse Stance Walk” helps us avoid lower back pain. <--- This statement not evaluated by the FDA. I am not a doctor. Ask your doctor before starting any health regimen. ADVANCED VERSIONS This exercise first strengthens the muscles all around the knees, above and below, mostly on the inside. Advanced versions awaken the deep gluteus layer muscles, the tops of the thighs, and the muscles above the pelvis in back, just below the back muscles. * Deeper. Lower your center of gravity. The Shaolin "ideal" or "goal" is to have the upper legs parallel to the ground. * Resting Horse Stance. Instead of walking, the old-school teachers will make you balance a staff on the tops of your thighs. As you're standing on two bricks. With your palms together in front of you. With a teapot on your head. * Lower Back Building. Some martial arts schools say to tilt the pelvis forwards but don't stick out your butt. This builds the lower back. (I don't do this; I think it potentially stresses the spine needlessly.) (With TEA in it.) *Tucked. Some martial arts schools tilt the pelvis back, to very slightly pull in the stomach. The abdominals are pressed towards the spine while breathing out, and held scrunched for a count, before releasing and breathing in again. (HOT tea.) * Wider. I don't know how safe this is. Maybe it's helpful for childbirth, I totally don't know. But some people do it, especially martial artists with extremely flexible kicks. 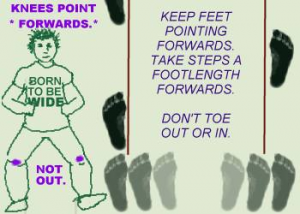